Today is my birthday

I bought an endurance road bicycle two months ago. As I tend to do, I'm all in. I know that I won't race bikes, but I enjoy getting out. (Let me know if you have questions about types of bicycles. If you're older, like me, you'll probably want an endurance or sportive bike instead of a race or mountain bike. E-bikes are also an option, but I know nothing about them.)

I started my day with an early morning bicycle ride, which was fun. And then I got caught up on my favorite bicycling vlogs: @BikerLawrence,@CyclingCam, and @FrancisCade.

Lawrence Carpenter (@BikerLawrence) is on an adventure with James and Francis. They’re cycling in the US – in my region of the county. They’ve been in America for less than a week and are already “fed up” with the crap food we eat. Lawrence talked about the lack of fresh food in today’s vlog.That got me thinking about food – why do people in the USA eat so thoughtlessly?  I’m included in that.

It prompted me to be more thoughtful today about what I ate. I started with oatmeal for breakfast. It was great and is a common breakfast for me. However, I wanted food when I got to the airport today. I went to the “fresh market” at John Wayne Airport, but it was actually packaged processed food.  I picked up two bananas at Starbucks, and then nuts at another stand. I felt good about my good choices, even though I’m not home.

I think that Americans, including me, eat thoughtlessly because of lack of planning. I’m going to work on planning meals while I’m on this trip.

I’ll let you know how it goes. 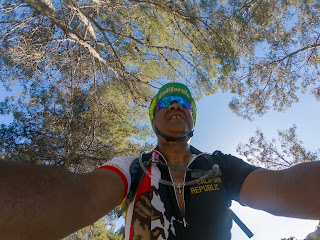 Resources: In Response to Recent Violence