Fitness and the Pandemic

December 07, 2020
The world fell apart on March 13, 2020. That's when the school I work at announced a temporary shut down. The "temporary" part lasted until the end of September.
I was serious about social distancing to the point that I didn't leave my house.
I also got no exercise. by July, my fitness was a mess. That's when I decided to buy a new bicycle. I didn't realize that EVERYONE else had also decided to buy new bicycles.
I went to one of the Trek Superstores in San Diego and took a test ride on a Trek road bike. It was a nice bike, but it was built with a seat post that was too tall for me. The shop offered to swap out the seat post at an additional cost, which didn't make sense to me. I thought they should sell me a bike that fit me  Soon after I left the shop, I got a message from the shop offering to swap out the seat post as an even exchange.  However, the moment had passed and I didn't return the call.
I'm glad I passed on the Trek, because, as I gave it more thought, I realize buying a stock Trek road bike wasn't much of an upgrade from the bike I was replacing. So, I did more research.
A couple of days later, I happened to see a ride a friend posted on Strava. It was his first ride on a custom built gravel bicycle. I had previously heard of the small company, Franco Bicycles. I contacted Hector at Franco Bicycles and made an appointment to meet him at his shop the next week. That's when I ordered a Franco Grimes gravel bike.
It was a serious upgrade to my prior road bike.
Here is my build:

It took seven weeks to get the bike because of the supply chain. The SRAM AXS Power Meter was the last piece to arrive.

It's a great bike that turns heads when I ride it. As a gravel bike, it is a legitimate road bike that also holds its chops on gravel. The one-by build is different from other road bikes. That gets the attention of other riders. 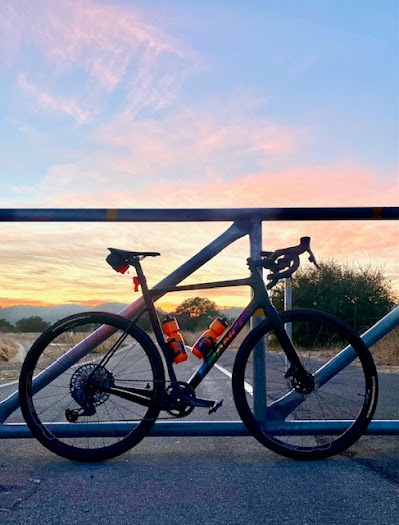 Habits to Change Your Life

August 23, 2021
I am a fan of Joshua Becker and Becoming Minimalist . I want to pass along the post I read this morning.  7 Daily Habits to Change Your Life Forever
Post a Comment
Read more

May 08, 2022
My younger sister passed away early Thursday morning following a long illness. My heart is broken. I will miss her terribly.  I used to say that Harriet never met a stranger. She found something to talk about with everyone. Harriet LOVED people, and they loved her in return. She also loved celebrating Mardi Gras. And, she loved introducing me as her Big Brother.  My brother and I are happy that so many people are sending us photos and memories of our sister. We look forward to continuing to celebrating her. John 11: 25 Jesus said to her,   “I am the resurrection and the life. Whoever believes in Me will live, even though he dies.  26 And everyone who lives and believes in Me will never die. Do you believe this?” 27 “Yes, Lord,” she answered, “I believe that You are the Christ, the Son of God, who was to come into the world.”
Post a Comment
Read more

April 25, 2011
It may have started when my friend Nicole Leimbach encouraged me to buy cage-free eggs. Prior to that I hadn't thought much about which eggs I purchased. One thing led to another and I've begun to look more seriously into ethical issues surrounding the foods I buy. I’m following CNN’s Freedom Project this year, which details modern day slavery, a practice that fuels some food-producing industries. Just before Valentine's Day 60 Minutes ran a segment on unpaid child labor in the production of cocoa, the raw product that goes into making chocolate. I’m taking more time reading labels at the grocery store in an attempt to understand where the food I buy comes from. However, it’s difficult to get that information. As an example, finding free range meats is almost impossible in most neighborhood grocery stores. And, as a chocolate-lover, it’s hard determining which chocolates are fair trade or ethical trade. I’ve also found that I can’t assume that chains like Trade
Post a Comment
Read more